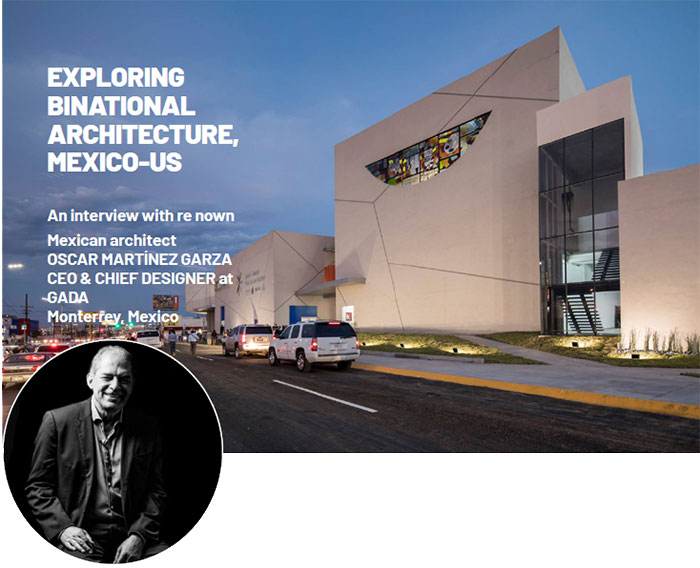 1.- We know that you have a degree in architecture from the University of Texas at Austin and you have spent your career working in Mexico and other countries giving you a unique perspective on multicultural architecture. What subjects do you feel should be addressed by architecture today?

It is clear that we, as architects, are urged to respond to all challenges of our contemporary living and anticipate a more futuristic vision. Sustainability and the use of more efficient spaces should be considered as obligatory. Our cities have evolved as much as our architecture and will continue to change adding complex systems of transportation which bring about several problems such as housing distances, infrastructure, energy shortage and mobility. We are now focusing on more compact and balanced projects, that are technologically intelligent and which may contribute to the quality of living. My focus has always been the interaction between people and architecture and is a continual goal regardless of country and culture. 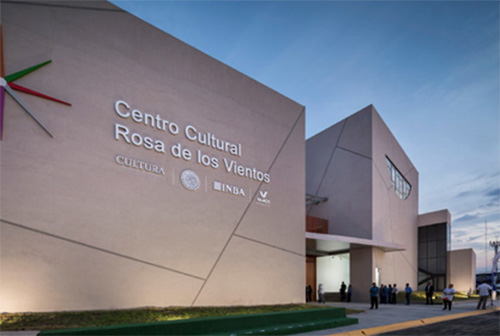 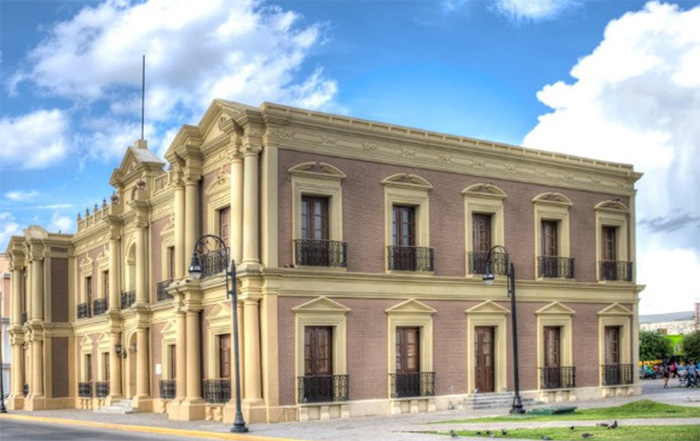 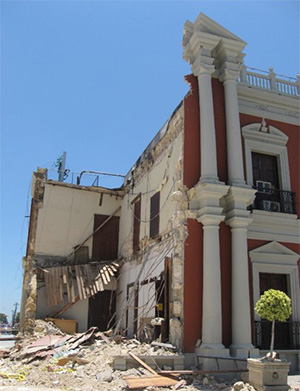 2.-What do you consider to be one of the most iconic projects that you’ve had the opportunity to work on?

All projects I have worked on are unique and distinct in dissimilar ways, but there is one particular assignment that may very well fit this experience. The Mexican Institute of Fine Arts and the city of San Nicolas near Monterrey, Mexico, endorsed a project for artistic development of children and adolescents through a program entitled ¨Mexico, harmony for culture¨.

We designed the art center as a people’s community space. The program established four academic areas: Music, Theatre, Literature and Graphic Arts and was named ¨Rosa de los Vientos¨ (Rose Compass) in order to stimulate curiosity, creativity and innovative thinking in younger students in a contemporary space. Through this design, our architecture studio earned the merit award of 10 DESPACHOS CREADORES DE ICONOS one of the best firms producing iconic architecture in Mexico by Obras Magazine.

3.-When did you begin to associate both contemporary and historic architecture in your projects? This is of clear significance in your work.

My desingns have always leveraged inclusivity. Historic components, as well as the will to recondition our architecture have been a conclusive goal to better our architecture . For instance, during the assignment to save the old administration building of Vitro Corporation in Mexico to install the first glass museum in Latin America, the goal was not only to restore the antique structure of the building but also to echo through its architecture its origins and evolution as a company founded in 1908. Their original industrial production, still being made today, is featured in the project through a floated glass wall viewing the kinetic journey of bottles on a moving band while the contemporary and newer float glass product allows a full vision of the company’s history. Vitro Corporation is now a worldwide leader on this field. The project was granted the prestigious CEMEX AWARD.

4.- Mexico has suffered over 160 natural disasters in the last 20 years, more than any other country in the world, resultant in the total or partial destruction of historic buildings. Have you ever worked on a building impacted by one of these disasters?

Yes, we have. One of the most important examples is the Municipal Palace of Linares (City Hall) located in the northern part of Mexico, partially collapsed during Hurricane Alex leaving only the central structure standing. This was a complex challenge as we were required to re-erect the damaged areas of the building by applying only original construction techniques and materials for the restoration.

The Palace of Linares was also intended to house the city government as it had been for the las 150 years, therefore, the project would need new technology to be mounted assuring an efficient and intelligent use. The old building now houses the government of the City of Linares and is equipped with intelligent systems. The project received several architecture honors such as a CEMEX national award and first place on architecture biennale.

5.- Recycling 20th century industrial frames and buildings are rarely considered to have sufficient architecture merit. None the less, you have redesigned several structures for new usages. Could you explain the way you have approached these projects?

Recycling architecture means also the act of reimagining form and function. it is a very intensive discipline for different reasons. Not all architecture is being designed to last extensively and technology advancements require constant adjustments and fluidity in order to meet current needs.. Our project for the International Forum of Cultures 2007 is solid example. The oldest steel mill in Latin America, created in 1900 and shut down in the 80,s officially named Site Museum of Industrial Archeology, holds several monumental structures such as the Lewis Combination Mill, a monumental 1000 feet long building. The space contained is impressive surrounded by lanscape and fountains inside the Fundidora Park, a historic landmark. Two of these are sunken fountains and mark a bridge like passage toward the main entrance of the building. All instalations in the building are apparent and placed before the visitors eyes. The Nave Lewis Exhibition Center, has receives near 1.5. million peopole per year showing egyptian and Aztec art works, private concerts, school graduations an weddings. xa